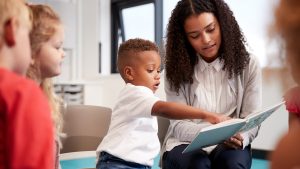 Whether it’s a word problem in math or a vocabulary assignment, reading is the glue that holds the entire educational process together.

Yet it’s estimated that up to 20 percent of students have dyslexia or another language-based learning disability that makes decoding letters on a page challenging.

A new app created at Boston Children’s Hospital is focused on screening children at younger ages to find out if they’re at risk for developing a reading problem.

Nadine Gaab, an associate professor of pediatrics at Boston Children’s and the Harvard Medical School, developed the app.

“The child is assessed on six different components. At the end, we know whether the early literacy milestones that the children need in order to successfully learn to read are there, or whether they need more help,” she said.

Right now, the app is being tested in 16 schools, including some in New England. Gaab says it could be in wide use by the start of school in the fall.

By targeting students as young as preschool, Gaab hopes this approach transforms how – and when – kids are diagnosed with dyslexia.

This app comes as a new law goes into effect in Massachusetts, mandating the Department of Education to come up with a system to screen all students.

“I just heard way too many horror stories of kids that have crashed and burned because they couldn’t keep pace with their peers,” she said.

L’Italien believes this is the right thing to do for the students, but she wants taxpayers to know it could help them too.

“It’s a pay me now or pay me later scenario,” she said. “If we can get to kids early, figure out what the issue is, and then give them the reading help they need, they are much more productive students, and potentially not needing to use the special education system.”

The final version of the app will contain resources for teachers, such as instructional videos and downloadable lesson plans.

It will also include literacy games parents can play with their kids, either at home or in the car.

Get in touch for more information about EarlyBird today!