The Game that Can Spot Preschoolers at Risk for Reading Deficits 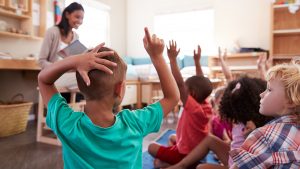 What if a short digital game for young children could help lower the high school drop out rate? That’s a long-range goal of a new effort by a team from Boston Children’s Hospital in collaboration with Florida State University, which has developed a 15 to 20-minute game that tests children’s early literacy skills and generates a red flag for those in need of extra support.  Research shows if a child is not reading by the end of third grade, they are far more likely to drop out of high school, which means early support can be critical.

Called the Boston Children’s Hospital Early Literacy Screener, the new game is administered on a touchscreen tablet. Kids as young as 4-years-old do tasks geared at assessing their literacy skills with the help of on-screen cartoon animals. Those include touching the picture that matches the word that is said out loud, identifying rhyming words, and finding the picture that matches a spoken sentence.

Current methods of helping struggling readers are more “reactive” than proactive, says Nadine Gaab, an associate professor of pediatrics at Boston Children’s Hospital and the Harvard Medical School and the creator of the game. Under current practice, many children aren’t identified as struggling readers until second or third grade or even later, Gaab said, when their teachers flag them and, hopefully, begin to provide extra support. That means they miss out on a prime early reading intervention period during kindergarten and first grade. “We basically let a child struggle over a long period of time before we take severe actions and give them access to the help they need,” Gaab said. “What we are trying to do is move…to a preventative support model in early literacy.”

“We basically let a child struggle over a long period of time before we take severe actions and give them access to the help they need.”

The game is targeted at ages 4 to 6. Gaab hopes the screener will ultimately help teachers who must teach reading to large groups of children. After a student finishes the game, the program creates a risk profile for that student and provides resources and suggestions for next steps on an online platform.

Most states, at least 37, have a policy regarding early identification of dyslexia, a learning disorder that impacts reading, spelling and writing; and 21 states have a statute or code that addresses screening students in grades K-3, according to a 2018 report by Education Commission of the States. But many teachers lack the capacity to live up to the requirements. Gaab said she was partly inspired to create the game after meeting with teachers who were overwhelmed about the imperative to screen students and interpret the results. States currently use a range of methods to screen students.

The screener, which was selected as one of eight winners by the 2019 MIT Solve program for early childhood programs, has been tested by about 800 kindergarteners or entering kindergarteners in 42 schools in nine states with an anticipated release date of this fall. The game will be offered at a low-cost to schools, Gaab said, with the eventual goal to partner with preschools, libraries and pediatricians “so that every child has the chance to be screened and develop their full potential.”

This story about struggling readers was produced by The Hechinger Report, a nonprofit, independent news organization focused on inequality and innovation in education. Sign up for Hechinger’s newsletter.